thetechie 2018-11-22 16:03:16
Done!!
The interview went well and after 2 weeks we got the confirmation.The 1st installment is paid and my boys are ready to get onboard, the fees is on the higher side compared to the other NPS in Bangalore. Also Whitefield is a franchise and not core NPS. However I still have faith in Mr.Goplakrishna keeping my figures crossed I hope the school lives upto to the NPS legacy.

Anyone has attended the interaction for grade 2? what is generally asked? 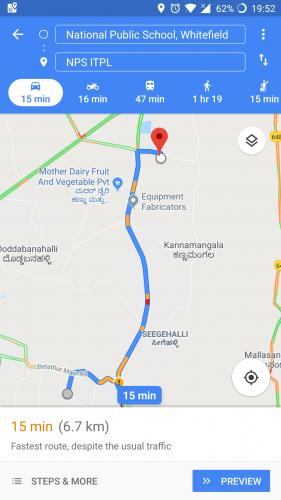 maya123 2018-11-23 19:57:20
The distance between the school is less than 7 kms, and both are attached to the same main road. This is going to create a big mess for the parents, especially for those who got there kids admitted to the Whitefield school
Sup30 2018-11-24 14:20:44
Nps itpl and nps whitefield is it confusion or rumour?
Subhrata 2018-11-25 12:20:55
I called up NPS OFF ITPL. They are starting their admission next week and are also a franchise..the school building is under construction and expected to be ready by April..fee structure similar to NPS Whitefield.